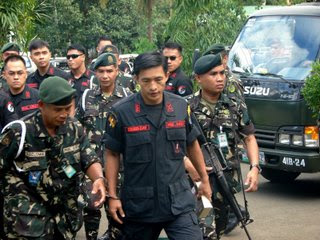 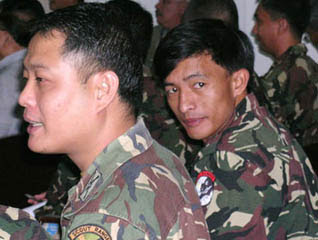 I have not been following the developments regarding the trial of Ifugao’s Capt. Ruben Guinolbay. If you remember from our previous posts about him (here and here), Captain Guinolbay is a medal of valor awardee who is now on trial for his alleged participation in an alleged attempt by some military elements to unseat she-who-must-not-be-named or the-one-also-known-as-Gollum (“Malacañang is mine, mine, mine. My preciousssss.”) Fortunately, Ellen Tordesillas has been extensively covering the military trial and in one of her comments to her posts she states:

“My observation of the accused officers, the detention and the difficulties they are subjected to, have not broken their spirit. They are as defiant as ever of Gloria Arroyo and Esperon.

I’ve no idea of the reason that prompted Captain Guinolbay to say what he is quoted as saying but it would seem that a pre-trial investigation report recommended the dismissal of the charge (of attempting to create a mutiny) filed against Guinolbay and his co-accused. Despite said recommendation, military authorities still went ahead and charged these officers and continue to keep them in detention. Let’s hope that Guinolbay is being treated well, mukha kasi siyang payat sa kanyang picture.

By the way, this is the reason why Captain Guinolbay was given his medal of valor: “Capt. Ruben Buyucan Guinolbay and his men just came from Southern Luzon after Scout Ranger training when they were ambushed by Abu Sayyaf elements in Lamitan, Basilan. They stood their ground. Some fell and died. Others were wounded. Under intense fire, Guinolbay carried civilians to safety and directed his men in a successful counterattack. For his gallantry in action, he was recommended for the country’s highest military honor, the Medal of Valor.” [Source: socnetcentral.com]

9 thoughts on “The List: More on Capt. Ruben Guinolbay”