They first called themselves the “Punks 11”. For some reason, they decided to change their designation to the “Sagada 11”. My guess is that the change was meant to catch more public attention.

They were successful in that regard since I got interested in their story when I started hearing of the Sagada 11. But being a good I-Sagada, I was irritated when some of the group’s supporters started calling for a boycott of Sagada. What the heck, they shamelessly appropriate Sagada’s good name and are now smearing the place. Here’s a picture that speaks for itself which I found in this site. 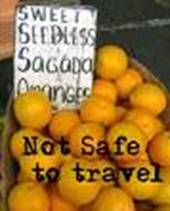 There’s also this statement from said site which goes:

Before I go on with my rant, let us start from the very beginning. You know, like Maria in the Sound of Music.

What is this Sagada 11? Well, they are a group of punks (and I thought punk culture is gone with the 80s?) who come from Davao, Manila, Pangasinan, Laguna, and Baguio who were arrested in Benguet last February 2006. According to the military, the punks are terrorists who raided a military camp in the town of Mankayan. For their part, the punks claim that they are just a group of innocent backpackers who were on their way to visit Sagada.

I don’t know what’s true between these two versions. But I find it a little hard to believe that a group of young people from different parts of the country would have the logistics and the local know-how to go about raiding a military camp in the Cordilleras. Besides, isn’t it kind of embarrassing for the military to admit, as it does in this case, that a group of out-of-town punks beat them in their own territory?

Anyway, back to my irritation with how Sagada was appropriated by this group of punks. First, other than the fact that they claim to be going to Sagada, let us be clear that Sagada has nothing to do with this group at all. They were arrested in Benguet, are incarcerated in Benguet, and are now being tried in Benguet. I turned the other way when they started calling themselves the Sagada 11. Although I thought it was disingenuous, I also thought it was harmless. It turns out that I was mistaken since, as stated earlier, some of the supporters of this group started painting Sagada in a very negative light. Sagada is “not safe to travel”, they claim. Boycott Sagada until the backpackers are free, they added. What stupidity, I thought. They totally lost my goodwill. I would have signed their numerous online petitions but didn’t because I was pissed off.

I doubt if Cordillera activists are involved in this stupidity of sullying Sagada’s name. I hope that they are aware of the fact that their allies in trying to get these punks out of detention are not helping their cause when they lose the sympathy and the goodwill of I-Sagadas.

Now that I got that out of my chest, I think that the allegations that the members of the group were tortured and forced to admit responsibility for the Mankayan raid should be taken seriously. I also think that the punks should have been released after the judge declared that their arrest is illegal. I was happy when two of them were released on account of their age. And I hope that the rest will be released sooner rather than later.

Here’s a short video interview with one of the punks who are presently detained.

Those who would like to support the group’s campaign for freedom can add your names here.

UPDATE: The nine remaining members of the Sagada 11 were released two days before Christmas. The judge who ordered their release ruled that documents — even those submitted by the police — showed that the punks had nothing to do with the Mankayan incident. More details at the Nordis Blog. Congratulations to the detainees and to those who worked long and hard to obtain this victory for freedom and human rights.