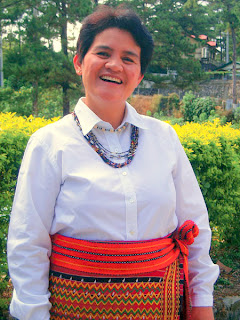 ELECTION FEVER. Gabriela Women’s Party names Igorot activist and former Overseas Filipino Worker as its third nominee to Congress. Flora Baniaga-Belinan (photo above) used to work as a domestic helper in Hongkong but is now doing advocacy work in Baguio. Northern Dispatch: “Flora was at the forefront of various major advocacies for the rights and welfare of migrants in Hongkong. She also promoted indigenous peoples’ rights to land, life, and resources, firmly opposing policies and projects in the homefront that particularly cause the destruction of the environment and exploitation of women indigenous peoples and children.” Read more here. Go Gabriela! Go Flora! [Source: Northern Dispatch]

SPORTS FEVER. The annual Cordillera Regional Athletic meet is now in full blast in Tabuk, Kalinga. Who will emerge as overall champions? Maybe Baguio or Benguet as usual. But Abra, which has a strangle hold on medal rich swimming, might just beat them, no? Historically, host provinces usually do well so Kalinga just might emerge on top. In a related news, Tabuk blogger Nats rants about a robbery incident which victimized the Mt. Province swimming team. Read it here.

AAAHHH, MARIJUANA. Marijuana is the number one reason why we have several Igorot men and women imprisoned at the National Bilibid Prison in Muntinlupa and the Women’s Correctional in Mandaluyong. It is the source of easy money but it is, whether we like it or not, illegal. Two of our kailians were recently arrested for allegedly selling marijuana to a drug enforcement agent in a buy bust operation. [Source: Sunstar Baguio]

BENGUET TEACHER WINS AWARD. Soraya Faculo of the Cordillera Regional Science High School in La Trinidad, Benguet was recently recognized by Inspiration Software for championing the integration of visual learning and technology in her classes. She is one of 30 teachers worldwide recognized by the company. Faculo will receive $750 which she will use to purchase InspireData and Kidspiration 2 as well as an LCD projector for teachers to use when integrating visual learning into lessons. [Source: Inspiration Website]

EEERRR, SORRY. YOU DON’T HAVE MENINGO PALA. A drug company will soon release a public apology to the City of Baguio and the rest of the Cordilleras for publishing an advertisement which depicted the region as stricken with meningococcemia. The city government sued the drug firm because of the ad but the parties agreed to settle the case: Baguio will withdraw the suit and the company will publish an announcement in a national daily — the size of which will be the same as the original ad — clarifying that the region has never been plagued with meningo. Shall we say all’s well that end’s well on this one. [Source: Sunstar Baguio]

WE VERY MUCH AGREE. “What’s the big deal about eating dogs?” asked Becky Judalena, who comes from a tribe in the northern province of Ilocos that’s known for eating dog. “This is a way of life. Why impose Western culture on us natives? To each his own. And to hell with the [French actress turned animal rights campaigner] Brigitte Bardots of this world.” [Source: Time Magazine]

WANT TO KNOW MORE ABOUT IFUGAO RITUALS? Then you should visit the Ifugao provincial website. It is, as we told you earlier, the best in the region and a godsend to those who want to know more about Ifugao culture. Quote: “There are rites performed at the start of every phase in man’s life, and rites for every stage of rice agriculture. The rites are performed by a native priest called mumbaki. The mumbaki must have a knowledge of the pedigrees of the person or persons (if a couple) for whom the baki is performed as he has to invoke their ancestors at least up to the 4th generation ascending, inviting them to join in the rites and act as mediators or intermediaries to the gods. Hence, in the Ifugao’s religious life, knowledge of pedigrees is the most important since all custom laws are supported by pedigrees.” More here. [Source. Ifugao.gov.ph]

LET’S WELCOME TOROGI MAMA. The more Igorot/iCordillera bloggers there are. The better it will be for us. Our newest blogger talks about the challenges of motherhood: “But when she was in between 9-10 months old, her developmental milestones just went full blast, she was crawling and pulling herself up and perfected to climb up and down one ledge in the house! And with all these new stuff that she learned she became hard to be put to nap and sleep! Everytime she’s laid down in her crib, she immediately wiggles out from her covers and quickly reaches for the rail and stands up.” I’m sure some of you can identify with Torogi Mama. Read more. [Source: Transplanted Highlander]

BE INSPIRED AND HAVE A GOOD LAUGH. It’s Sunday morning so it’s good to read an inspirational story on how we sometimes get the things we want but not in the way we imagined it. Or you might want to have a good laugh with this one; it has something to do with your posterior. [Source: Kalinga Tambayan]

UPDATE ON THE BARRIO FIESTA STATUE. Bugan has pictures of the Barrio Fiesta site where the controversial statue used to stand. So we now have visual proofs that it is really gone. Thanks Bugan for taking the trouble to go take those pictures! You can see the pictures here.