US Tour: Ifugao Music and Dance Ensemble of Banaue 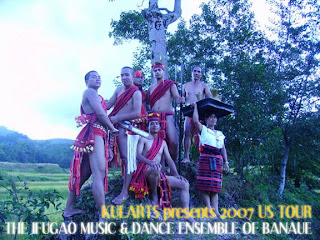 Yo! Is this blog becoming US-centric or what? May Kabunian forbid! Anyway, those of you based in the U.S. might want to check out the Ifugao Music and Dance Ensemble of Banaue if, by any chance, they will perform in a place near you. They will be in the U.S. from Sept 24 to October 30, 2007.

We will post the group’s sked when we get a copy. But here’s a description of the group and what they do:

The seven virtuoso tribal artists, ages 24 to 62, invited to participate in the US tour, have committed themselves to the stewardship of the Ifugao people’s dance, music, tribal arts, and indigenous cultural practices as a dynamic relevant part of contemporary life.

The ensemble’s rousing performance includes the himong, a powerful and communal trance-inducing dance, that calls for both the living and the dead to rise up for justice; the dancers’ sweeping arms that emulate eagles in flight over the grand rice terraces; the infectious, interlocking rhythms of the gangha ensemble (3 flat gongs played either with a stick or the hands, and a drum called lib-bit); the playful competition of native games such as fighting spinning tops and wrestling; and the melismatic melodies of the alim and the hudhud, captures the beauty and power of Ifugao culture. Visit kularts for more.

The group is composed of the following:
James Banayan Beyer, Jr. is a 25-year-old dancer and musician. He is also an expert in traditional games, and has participated in various local competitions. He is a traditional rattan weaver. He has performed at the Pascual Commercial Center and at Northwestern University in Laoag City.

Johnson Tayaban Binwag is a 27-year-old dancer and musician and an expert in Ifugao games. He has performed at the Imbayah Festival, the Pascual Commercial Center, and at Northwestern University in Laoag City.

Minifred Gavino is the project manager and will serve as production liaison between the Ifugao artists and Kularts. Her experience in art management, staging, tour and production, is essential to the smooth and successful facilitation of this tour. She was a member of the University of the Philippines’ Kontemporaryong Gamelan Pilipino Music & Dance Ensemble. She toured all over the United States, Canada, Europe, and Asia. She worked with the Operation Brotherhood Montessori Center, Inc. in Manila was an assistant to the Chief Executive Ambassador Preciosa S. Soliven and choreographer for UNESCO supported projects.

Sheldon Pugong Grajo is a 26-year-old virtuoso gangha musician, singer, and dancer who is the grandson of Apo Pugong, one of the last living mumbaki (high priest or revered ritualist) of the Ifugao-Tuwali tribe. He has assisted his grandfather in rites and rituals since his boyhood. A well sought-after singer, he has performed with Hapiyo Mi Dance Troupe at the Pascual Commercial Center and Northwestern University in Laoag City. He is the artistic lead of the ensemble.

Hukita Dulnuan Licyag is a 61-year-old master artist in gangha music and dance with a mesmerizing and soul-stirring voice for both sacred and secular chants. A skilled metal craftsman, Mr. Licyag is a respected elder of his tribe for his spirituality and deep knowledge of the old ways of the Ifugao. He has performed at numerous festivals, at the Pascual Commercial Center, and at Northwestern University in Laoag City. He is the elder of the group.

Yolanda Tayaban Nagulman is a 46-year-old dancer, choreographer, and weaver. As a school teacher, she is dedicated to the preservation and study of indigenous tradition, including textile-making, myths & stories, and tribal laws. She teaches hudhud, an ancient secular chanting tradition of the Ifugao people. She has performed at the Hudhud Festival in Baguio, at various local festivals, at the Pascual Commercial Center, and at Northwestern University in Laoag City. She also directs her elementary students in traditional music and dance, performing at various local events and competitions.

Renato Binnay Patacsil is a 38-year-old dancer, musician and orator. He has performed at numerous events, including: Ifugao Foundation Day, the Imbayah Festival, Urp Ad Banaue, Pascual Commercial Center and at Northwestern University in Laoag City. His knowledge of Ifugao tradition is as practiced by the people of Bangaan. As a firm believer of self-rule and participation in governance, he is a dedicated public servant and has served two terms of public office as a councilman for the Province of Banaue. He is the spokesperson for the group.

13 responses to “US Tour: Ifugao Music and Dance Ensemble of Banaue”