As most of us know, Sagada and Banaue/Batad are the Cordillera Region’s top tourist attractions. Well, is actually the prime destination but it is overrated and it is a messy mess. Tourists going to would be better off going to Sagada or Banaue or other Cordillera towns such as, say, Balbalasang in Kalinga.

Well, I’ve not been there yet but this article by Art Fuentes from the Haribon website has awakened the travel bug in me. I’m tempted to shove my clothes in my backpack and to head over to Balbalasang. But maybe I’ll wait first for an invitation from our kailians in Balbalasang who would be kind enough to invite me, ha ha. I’m shamelessly fishing for an invitation eh? Well, Art Fuentes says Balbalasang reminded him of the Lord of the Rings and I’m a big Lord of the Rings fan. I’m not sure I can ever go to where the movie was shot so I’ll visit any place that looks like it. 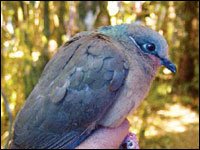 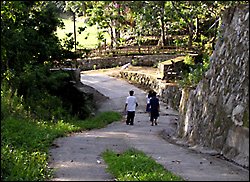 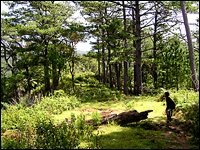 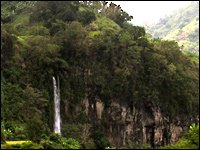 Despite the long and difficult drive though, no one was complaining. We had passed through some of the most beautiful mountain roads anywhere in the country. The light rain and the mist shrouding the mountains which occasionally obscured the road, and the fading light all conspired to make driving a bit more difficult, but they also added to the magical quality of the trip.

The rains made the area extra special. Driving from Balbalan to Balbalasang we counted eight waterfalls of varying sizes, some of them seemingly painted by some artist who rendered Rivendell in Peter Jackson’s Lord of the Rings. One was especially worth noting—its top was obscured by clouds making it seem as if the cascade was coming from heaven itself.

Biodiversity: Mt. Balbalasang-Balbalan is one of the most interesting and important sites for biodiversity conservation. Its hardwood, pine and mossy forests have survived the rash of mining and logging-driven development that has scarred much of the Cordillera.

A survey conducted by the and Haribon in 1999 found that the area to be very rich in biological diversity.

Another survey conducted by Haribon in 2001 found that there are at least 83 species of birds living in Mt. Balbalasang-Balbalan. 34 of these birds are endemic to the , while 2 of them—the Isabela oriole (Oriolus isabellae), and the Flame-breasted fruit dove (Ptilinopus marchei) can be found only in . The forests also support a diverse population of warty pigs, deer, civets, macaques, bats and rodents. Two of these mammal species are listed as endangered, namely the pygmy fruit bat (Otopteropus cartilagodonus), and the bushy-tailed cloud rat (Crateromys schadenbergi).

So I won’t be fully accused (okay lang kung partially accused) of stealing Art Fuentes’ article, you should go to the Haribon website to read the whole write-up. If the article intrigued you enough to visit Balbalasang, make sure you don’t destroy the town’s biodiversity when you get there.
Photos courtesy of Art Fuentes and the of Natural History.

18 responses to “Move Over Sagada and Banaue. Here Comes Balbalasang!”