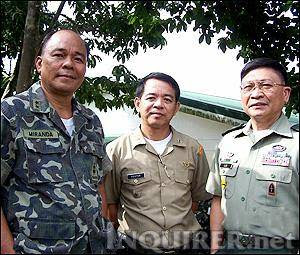 Thanks to Chyt of Smorgasbord for confirming that he is indeed a kailiyan. If I am not mistaken the military lawyer is from Sagada/Besao, Mt. Province. (If he is not from Sagada, then we will claim him as our own. Ikuya yo met-a nga iBesao. uray ket ado met ti achievers yo hehe.)

Last Friday, the officers accused of planning to withdraw support from Gloria Arroyo in February 2006 led by Maj. Gen. Renato Miranda and their lawyers walked out of the court martial hearing in Camp Capinpin, Tanay Rizal.

It was an occasion where officers and lawyers were called upon to make a stand. Many courageously responded.One man stood out: Maj. Basilio Pooten, the military defense counsel.

And here’s a follow up report from the Inquirer:

The 28 officers linked to the alleged February 2006 coup plot saluted a military counsel for being a “warrior” and standing up for them during a tension-filled court martial hearing that had the accused walking out last week.

Marine Major Basilio Pooten refused to take over as counsel for the officers after their civilian lawyers excused themselves from the hearing. The officers eventually walked out on the proceedings in protest.

“We, Marines and Scout Rangers, salute you, Major Pooten,” the officers said in a statement. “You proved yourself to be a true Marine. Being a lawyer, you may not have been a Marine all your career life, but you surely had imbibed that warrior spirit and honor.”.

The officers also worried for Pooten, who they said might find himself “out in the cold” given the “vengeful character” of the military leadership.

But Pooten, in a phone interview, said he was merely doing his job as the military-appointed defense counsel.

He said he refused to take over from the civilian lawyers since, under the Constitution, an accused is entitled to a counsel of his choice.

“I am just doing my job as military defense counsel…I have to exhaust all legal means to protect my clients, General Miranda et al,” Pooten said, referring to former Marine commandant Major General Renato Miranda, the most senior of the accused officers.

Contrary to reports, Pooten said he did not walk out of the proceedings at Camp Capinpin in Tanay town, Rizal province, where the accused officers are also detained.

The accused and their lawyers want to stop the proceedings until Armed Forces Chief of Staff General Hermogenes Esperon Jr. signed the pre-trial advice (PTA), a document that recommended the filing of mutiny and other charges against the 28 officers.

Prepared by Esperon’s own staff judge advocate, the PTA reversed recommendations by a pre-trial investigation to file only lesser charges against some of the 28.

The group allegedly planned a mass withdrawal of support from President Gloria Macapagal-Arroyo on February 24, 2006, the 20th anniversary of the 1986 People Power revolt that toppled the Marcos dictatorship and restored democratic institutions in the country.