Anyways, here’s Sarah’s pictures and descriptions — the quotes below are hers — of our food from the boondocks. To be fair to her, except for the “morally dubious” thingie, she didn’t really say anything bad. Read her article here. 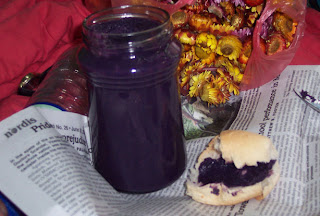 “Ube jam: Ube is a purple yam that is used in Philippine pastries and candies. The ube jam was sweet, but the consistency was strangely starchy.” 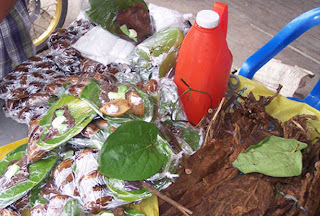 “Betel nut: Chew this nut and you’re supposed to get a natural buzz. In rural areas of the Philippines, you see people with their teeth permanently stained orange from partaking in the betelnut. I tried chewing it but it was very uncomfortable–like I was getting a dental X-ray–and gave up without feeling any effects.” 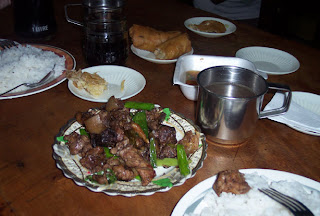 “Dog meat: In the Cordillera region of the Philippines, you can find the occasional restaurant that serves dog meat. This dog dish is from the Sagada Lunch restaurant in Baguio City. They serve nothing but dog meat, seen in the photo above served with rice and dog soup. The restaurant also features karaoke and cheap bottles of gin. The dog meat was very tasty–like wild meat–but incredibly tender.” 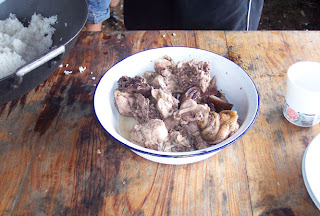 “Pinikpikan: Animal rights activists wouldn’t enjoy the traditional dish in the Cordillera region, pinikpikan. First, you beat a live chicken to death with a stick. This makes the chicken bruise, changing the texture of the meat. Then you cut the meat up and boil it with salt pork.”