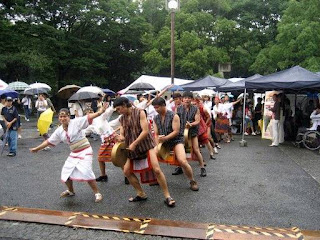 Rain or shine. This was what our kaka-ilyans, the Cordillerans in Kanto, Japan, agreed among themselves the day before their performance at the Philippine Fiesta 2007 in Yoyogi Park in Tokyo. True enough, typhoon notwithstanding, the ladies in the colorful Cordilleran tapis/dresses and the men in wanes/g-string danced the pattong/pal-look with pride and gusto at the event, although the performance was not exactly as practiced.

This pride and gusto of Cordillerans, whether they be here in Japan, the Philippines or anyplace else, come from their pride in their identity and roots. In much the same way, we believe the Philippines would benefit greatly if all of us Filipinos felt pride in being Filipino, and loved our country and our fellow Filipinos.

At the Philippine Fiesta, performances were held in two distinct locations. The first was the park’s big stage, where, apparently, the “main” program for dignitaries, diplomats and important guests was held. The second was a much smaller “stage” located at one corner of the park, not very far from the main stage. It was at this “stage” (a platform raised around six inches from the ground, roughly 20 sq. m. in size) that performances by OFWs in Japan and other Filipino communities were held, seemingly to entertain fellow Filipinos and friends of other nationalities. It was also at this area that an ecumenical service was held first thing in the morning.

Why the two stages, and two different programs? The reason for this was not explained to our kaka-ilyans, but it was pretty clear that a distinction was made between “local” Filipinos (those residing in Japan) and those deemed good enough to perform for the dignitaries. It was quite surprising that even Japan-based Filipino singers and artists, such as Tampipi, performed in the second smaller stage. We wonder, is this how we treat OFWs, our modern-day Filipino heroes?

It seems that those who performed at the big stage were mostly flown in from Manila, among them the folk dancers of the Cultural Center of the Philippines (CCP). The presentation of the CCP group started with a segment of dances representing dances of the Philippine Cordillera. The costume they wore looked like genuine Ifugao and Kalinga native attire, but the dances they performed did not at all appear Ifugao, Kalinga nor Cordilleran. At one time, our Cordilleran friends thought they were dancing the Kalinga salidsid, but a Kalinga would most likely say that it is not their true dance.

Naturally, our kaka-ilyans felt upstaged by the CCP performance, but still they loudly cheered the performance of the CCP group. When they were informed that they were not going to present their pattong/pal-look at the same stage, however, they were furious. Instead of walking out or creating a scene, they held their heads high and still performed at the smaller stage.

Not even the rain nor the limiting space of the tent-covered area could stop them from giving their all to the performance. Going out of the tent and dancing in the rain — heartwarmingly joined by Tampipi’s Ka Noli — our kaka-ilyans toured their performance around the fiesta grounds, swaying to the beat of the gangsa and inviting the audience to join them.

After the presentation, one elder sister said, “That was not our best performance. But I am very proud of what we did.” She is indeed a true Filipino Cordilleran.

NOTE: This article was sent to us by Dan Peckley who is based in Japan. In the next blog posts, we will publish the response of Eric Gerardo Tamayo, Consul of Philippine Embassy in Tokyo, to the issues raised in this article and Dan’s subsequent suggestions. [UPDATE: They’re here.]

2 thoughts on “Igorots/iCordilleras in Japan”