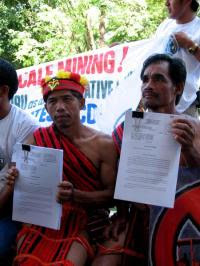 Apparently, the indigenous peoples of the world cannot facilitate themselves so the United Nations is appointing a non-indigenous person to “undertake consultations on the proposed UN Declaration on the Rights of Indigenous Peoples”. [Report here.] What a slap in the face.

Incidentally this person is former Supreme Court Chief Justice Hilario Davide, a man we used to respect a lot but we eventually lost our respect for him ever since he became a tool for the GMA administration.

The former Chief Justice is also a member of the Supreme Court majority which, in effect, ruled that foreign mining companies can kick out indigenous peoples from their ancestral lands. [Source] So it’s like the UN is rewarding Davide for legitimizing a law that oppresses indigenous peoples.

As Filipinos, maybe we should be proud that Davide is being appointed to head this effort. But as indigenous peoples, we are quite scared of the possible damage that he will do. We won’t be surprised if, as head of this consultative body, he tries to advance the pro-mining, anti-indigenous peoples agenda of the Arroyo government.

Now, we think that one of the reasons why Davide was appointed to this UN body is due to the relatively favorable reputation that the Philippines enjoys in the area of indigenous peoples rights. However, the fact that we Philippine indigenous peoples appear to be better off than our brothers and sisters in other countries is due to the vigilance of indigenous organizations (Hello CPA, Hello KAMP, Hello ECTF/ECIP, Hello non-leftist IP orgs) rather than the benevolence of our government.

We hope that IP groups continue to be vigilant and we hope that they will question this unfortunate appointment.

PHOTO CREDIT: Didipio Campaign (Photo above shows our kailiyans who petitioned the Court to protect the rights of indigenous peoples but whose pleas were ignored by then SC Chief Justice Davide).