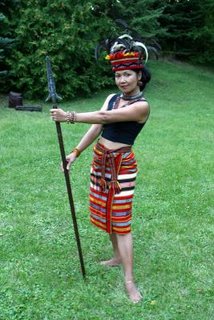 Dear Bill,
Hi. It would appear that the solution to the problem most of us deal with when it comes to the exploitation (this is a pretty heavy word) of our culture seems to hinge on the question of whether it is non-Igorots or us who do such exploitation (heavy word). We understand that musicians, as any practitioners of the other arts, are given the license to improvise on their craft.

However, it is precisely that artistic license which spawns all the negative sentiments which we then harbor towards those who attempt to represent us. The primary reason for this would be the fact that the sights and the sounds which we’ve been accustomed to have been unchanged since when our forefathers originally performed them. (It’s very safe for us to assume this since the first contact most of us have with our native music is during our cultural celebrations. We learn how to play the gongs, etc. from our elders who have gotten the knowledge from those who came before them.) It is then an assault to the senses when we hear a variation of what we’re familiar with. And the irritation more so if the violator is a pretender — a non-Igorot.

So, would it then be pardonable if the artist who massacred our songs or our dances came from our ranks? An Igorot? I would say, absolutely yes! Let our brothers be creative with our songs and our dances. Let them tinker with the notes and the steps any which way they desire. With the natural groove which the Igorots possess, I bet that they would eventually come out with a piece that should be worthy to present in any stage. Or if they should fall short, then at the very least, it would be them and not some outsider who would make our own songs sound silly.

I made a similar point in an article here. But before anything else, I would like to stress that the comment on the Benguet cowboys in said article is not in any way meant to disparage them. As a full reading of the article would reveal, it was made in consonance with the article’s thrust which is to challenge the Igorot artist to aim high or go for the big time and that their best chance of doing this is to look at their roots. But hey, if they could create a country sound which would displace American country singers’ songs from the charts, then, great. It would be like beating them Americans at their own game.

I think that should be all for now.
Pagano

Daming tanong ano he he. Anyway, Pagano and I decided to share our ideas on this matter via this Conversations. Do join us as we wrestle with the issue. And let’s welcome Pagano to the blogosphere, you can read his blog here 🙂

4 thoughts on “Conversations: Culture and Commerce (3)”