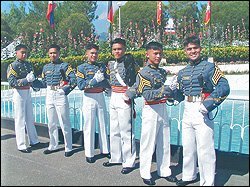 Find the Baguio beans among these Peemayers. From left: brothers Joseph Orland and Michael Gotong; Cesar and Jomar Canazares; and Randy and Romel Sotero. Photo courtesy of the Inquirer.

It would have been much better if these mistahs, especially the Baguio beans, wore their G-strings when this picture was taken. I’m sure their femmes and their wives will love it. But I’m not quite sure about the shakus and the Paradise Lost.

If the above paragraph makes no sense to you, this translation of the Philippine Military Academy (PMA) cadet lingo will hopefully clear things up: mistahs are PMA classmates, Baguio beans are natives of Baguio, a G-string is the cadet officer’s sash, a femme is a cadet’s sweetheart, a wife is a bunkmate, a shaku is a cadet who is unusually strict, and Paradise Lost is an archaic term for an ex-sweetheart. (In the next post, we will publish the Cadet Lingo, courtesy of this site.)

This cadet lingo proves that PMA cadets can be funny and creative. It takes creativity and a great — or maybe wicked — sense of humor to come up with the following: busted aristocrat (a cadet officer who has been demoted), fatigue duty (when one is entertaining an unexpected visitor), idlers (cadet in sick confinement), and immaculate (upperclassmen).

But as in any playful use of language we also find some words that can be offensive. For instance, why is a native of Cagayan a “buaya”? Why is a woman a “booga booga”? Why would “rumba negra” mean marching out of steps? As most of us know, “buaya” means crocodile in English. “Booga booga” is plain sexist. And negra brings to mind an African woman. Are we saying that African women can’t march? Food for thought, you kaydets (that’s the cadet jargon for cadets :-).

But let’s go back to the picture above. In case you are wondering, the Sotero brothers are the Baguio Beans. According to a report by Desiree Caluza, the Soteros’ grandfather Felimon Sad-ang traveled from Bontoc in his G-string (the Igorot loincloth not the cadet sash and certainly not the underwear) to attend his grandkids’ graduation. The Gotong brothers, who come from Benguet, may also be Igorots but I can’t really confirm if they are.

Impressively, Romel Sotero ranked number three in their class while Michael Gotong was number five. With 324 graduates, the Mandala Class of 2006 is the biggest class ever in PMA history.

5 thoughts on “PMA Cadets Can Be Really Funny”