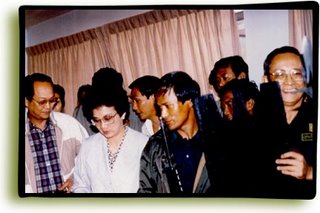 Photo above shows Conrado Balweg with former President Cory Aquino when the two signed a peace pact agreement which ended the hostilities between government forces and Balweg’s Cordillera Peoples’ Liberation Army. Unfortunately, Balweg — who made it to Part 2 of our List — didn’t sign a peace pact with his former colleagues in the New Peoples’ Army who were allegedly behind his assasination.

The moral of the story? Sign peace pacts with everyone! As Odina Batnag says, “Come all citizens of the world. We are one, we are one. We have one hope. We have one dream. And with one voice, We sing.” Okay, I took liberties with the song and changed children to all but you know the reason why.

Want to know more about peace pacts? Click here for a folktale on its origins courtesy of Carmencita Cawed.