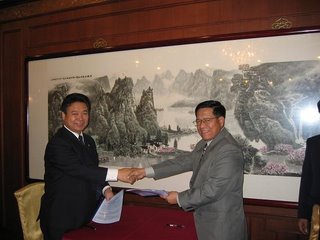 This picture of Philippine Coast Guard Commandant Arthur Gosingan (right), shaking the hands of a Chinese official was originally posted in The List: Part 5 but Blogger kept messing it up (or maybe it was my fault he he) so I decided to make a separate post on him. The Commandant, who hails from Bontoc, Mt. Province, has been in the news lately since he is leading the Coast Guard in cleaning up the mess caused by an oil tanker which sank off the coast of Guimaras Island. 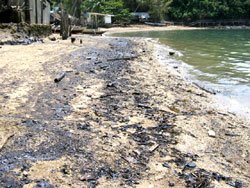 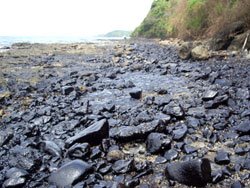 I once went swimming in Guimaras’ white beaches but I’m not sure if I can do that again in the near future. We pray that Commandant Gosingan and the Philippine Coast Guard will be up to the challenge before them now and the days ahead and that our brothers and sisters in Guimaras will recover from this tragedy sooner rather than later.

UPDATE: According to commenter Gracia Kibad, Commandant Gosingan is from Bila, Bauko and not Bontoc. Much thanks for the info, Gracia.